What Makes An American?

Last year in American Studies we went over the question “What makes an American”? In light of racist comments that have been encountered online, specifically on twitter, I would like to bring the question up again. Is an American someone who, simply put, was born in America? Or are there other elements that contribute to the meaning of being an American?

On July 17, baseball fans took to twitter to rant about Puerto-Rican singer Marc Anthony performing “God Bless America” at an All Star Game, claiming that he along with his performance were “un-American.” Other racist tweets were made questioning the singer’s citizenship. 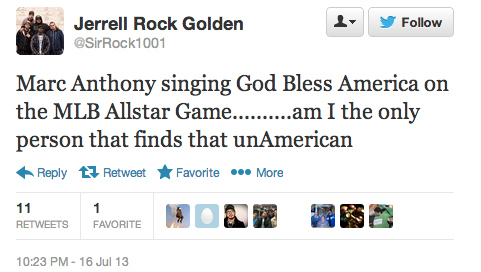 To set the record straight, Marc Anthony was born and raised in New York. Puerto Rico is also a commonwealth of the United States, automatically making anyone Puerto Rican born a U.S. citizen. Why then was Marc Anthony’s performance labeled as “un-American”? Must a person be of European descent and not a minority in order to be recognized by others as an American?

About a month before the MLB incident, a similar event occurred when 11 year old Sebastien De La Cruz performed the National Anthem at the NBA finals wearing a Mexican charro outfit. This time, basketball fans took to twitter to create a downpour of racist hate on an 11-year-old who was only expressing pride for his culture.

De La Cruz is not an illegal immigrant, and was born in San Antonio. If legal citizenship is not enough to qualify you as an American, it should be mentioned that De La Cruz’s father is also an American veteran who served with the Navy Seals to protect the country he loves.

The most recent event was the Miss America Pageant on September 15, which led to another outburst of hateful tweets after Nina Davuluri became the first contestant of Indian descent to win the crown for Miss America.

These three events in a row, all with a nearly identical procession of events, bring me once again to the question: What makes an American? Why must certain criteria be met in order for a person to be acknowledged as an American? And who are we to think that we have the right to tell others what they are or are not?

The newspaper is out tomorrow morning! Check your advisories or the stand outside Ms.Mowery’s room for a copy!
Check the Link in our Bio later today for a fun “What Thanksgiving Food Are You?” Quiz. Gobble Gobble!
Senior Jonathan Howell scores a 231 average at Waveland vs Jones, Payton wins the bowling match!
Food review gives scores for Lou Malnati’s pizza after a class of taste testing.
Can you spot the Payton teachers at today’s rally? 📷 Former Editor Matt Mata @ctulocal1
Payton CTU members rallied downtown near Daley Plaza on Day 5 of canceled classes. Teachers will picket at their schools at 6:30 a.m. tomorrow. @ctulocal1