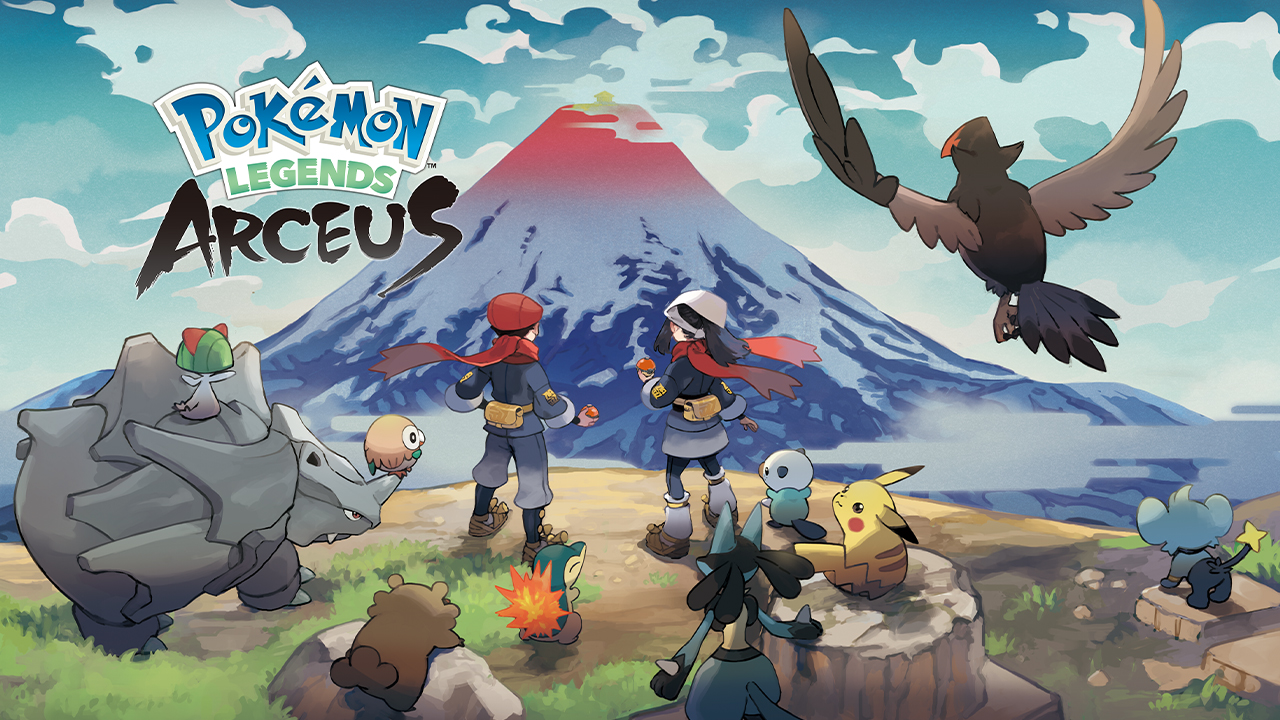 Pokemon Legends: Arceus is an action-adventure RPG game developed by GAME FREAK and published by Nintendo and the Pokemon Company. It is the first-ever spin-off of the Pokemon video game franchise based on Pokemon Diamond and Pearl. In this game, go back in time to the Hisui region–the Sinnoh of old–and help create the very first Pokedex!

After falling through a mysterious space-time rift from the summit of Mt. Coronet, you will meet Professor Laventon, a Pokemon researcher who wants to learn more about these mysterious creatures in an era where humans and Pokemon have not yet learned to coexist. After joining the Galaxy Expedition Team’s Survey Corps, go on excursions to research Pokemon and create the Hisui region’s first Pokedex. Along your adventure, you will meet the Diamond and Pearl clans, who worship their image of “almighty Sinnoh”, a Pokemon said to have created time and space. Wage battles against noble Pokemon that have been frenzied by a mysterious power, solve the mystery of the space-time rift, and learn of the extensive history of how Hisui became Sinnoh.

Explore the Hisui region in open-world graphics and exciting battle mechanics. You can catch Pokemon by throwing PokeBalls, as well as battle them by sending out your own Pokemon to fight. Some Pokemon are placid and easy to approach, while others may run away or attack you when you’re spotted. As you embark on excursions through many ecosystems, meet special ride Pokemon that will lend you their strength to transport you to your destination in a flash. One useful tool for your adventure is the Arc Phone, a mysterious device that was given to you by a certain Pokemon. Use it to access the map and learn of your current location and objective.

There are special regional variants of Pokemon in the Hisui region that live in various environments. For example, Decidueye, Typhlosion and Samurott (the final evolutions of the starter Pokemon Rowlet, Cyndaquil and Oshawott) have regional forms that gain a secondary type and powerful signature moves!

After completing the main storyline, you will be able to go on special missions to catch Mythical Pokemon, depending on what games Pokemon Legends: Arceus connects to:

Pokemon battles get an exciting upgrade! When a battle begins, you won’t enter a battle-only background, seamlessly entering battles! Select a variety of moves from your Pokemon (a single Pokemon can learn only four moves at a time.) to attack opponent Pokemon. Use moves in two distinct styles: Strong Style, to boost the move’s power and effects, but drops the user’s action speed (the Speed stat, but may occasionally let a Pokemon attack twice) and Agile Style, to drop the move’s power and effects, but boost the user’s action speed. As you explore Hisui, battle massive Alpha Pokemon, powerful Pokemon that are outstandingly strong, to train your Pokemon or to catch them to use their strength.

You can find lost items from other players and return them to gain merit points. Use the merit points to buy items to evolve your Pokemon or boost their strength. You can also trade Pokemon with players. To do so, head to the Trading Post in Jubilife Village.

Relive the history of the world of Pokemon!

Pokemon Legends: Arceus is available for purchase at the Nintendo eShop, at the price of $59.99. The ESRB rating is E for Everyone for Mild Fantasy Violence.